On Behalf of the Magazine WitschaftsWoche, three international Design Teams were asked to create new logistics, attractive interiors and contemporary facilities for the railway of the future. By definition, an ADD-ON is an optional module which is expanding an existing hardware, generating new functions. It can be seen as a backpack which is installed over a certain platform and can be removed or replaced at anytime. Adding, but without compromising the basic usage of the platform in question.

ADD-ONS are a simple, fast and economic approach for the upgrade and modernization of existing trains. Only by long periods of operation, trains duch as the Ice Velaro become economical for companies. That’s why new developments and investments in future train models are rare. With the example of the Velaro individual options, called ADD-ONS, are presented in the following project. They allow passangers a modern and attractive train journey without the need of high investment costs and effort on the part of the transportation company. 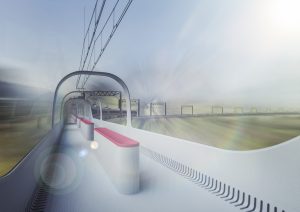 The newest generation of trains have to forsee changes is society before, and offer solutions for the next decades. But who can estimate how the European Economy and Transportation will change in the next ten to twenty years for modern travelers? When the Velaro was developed, the producer created a modular system. This complex system offers a kind of flexibility. But it’s not serving the travelers, it serves the producer. It’s a technical system, which can be adapted to different railway frameworks. Because of this system, the velaro can react to country specific requirements like rail width, different signal systems or other diverse technical specifications. So the Velaro can be operated in Spain as state-train (RENFE), in Russia as SAPSAN, in Turkey as Velaro TR or in China as CRH3. The user, in our case the traveler, has not that many benefits. He has to sit in a twenty year olf train, is fighting with his smartphone to find a network, is fighting with his neightbor for a electric plug or is searching for a proper and comforable position to have a small nap after a long working day.

Numerous services of the Deutsche Bahn like a smartphone app, revised card machines, bahncard offers, a own Bahn Magazine, Online-Tickets or selected menu offers by famouse cooks, are already in use. We are talking here about services, but there was no change or improvement in the “hardware” so far. Because this is expensive, the trains haven’t be developed to adapt to changes in the interior. 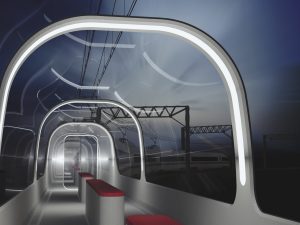 The concept of ADD-ONS consists of individual elements. They are build/added onto trains or their interior. They offer targeted solutions without the need of large investesments and intense developments. The ADD-ONS can react quickly to the rapid development in passenger transport, their problems and requirements. We limited our work to three examples, suggestions resp. ADD-ONS for three observations. From small ones like a head-rest to a capacitive recharger for electronics to a complete waggon. The obeservations are divided into three themes: Resting and Sleeping, Working and Entertainment and Rail travel as an experiance.

While traveling by train, there are certain possibilities to occupy yourself. One of the most common is sleeping. Current trains make it quite difficult to find a pleasing position for this “task”. The current blue pillows, with their white “napkin” should suggest a pleasant and clean comfort. But reality is quite different. They are way to flat, stiff and don’t look clean. They could also be just a print on the seat and it wouldn’t make a difference. It’s really hard to find a reason for this object. So the first ADD-ON we suggest is a adjustable neck restm made out of flexible rubber, produced via RIM-molding. It would be easy to clean and the production technique gives the opportunity to insert a simple adjusting mechanism. The neckrest would be mounted on the existing chair and with the adjustable “ears” it provides a certain privacy when collapsed.

If your seat neighbour is not sleeping, he is definately typing and swiping on one of his smartphone, tablet, phablet, kindle or laptop. These devices need to be recharged, the problem: There are way to less power supplies and if you find one, you should be the lucky one not to forget the recharger when you leave the train. Meanwhile more and more devices support induction recharging. Starbucks is working on a integration on wireless induction recharging stations in their coffe tables. Apple introduced with the Apple Watch induction recharging for their next devices. Ikea launched a induction recharging system for home use. There is this tiny little detail in the folding table, we mean this round embossment in the surface. It’s made for plastic cups and Coke tins. While they have served their usage their raison d’être has been replaced by mainly closed PET bottles. Why not changing or updating this detail of the folding table? The ADD-ON would be a capacitive charging unit. A imprinted surface or colored insert would serve as indicator for the charging position. When a device is placed on this position, the recharging process starts.

OBSERVATION – rail travel as an experiance

As soon as you enter a speed-tain like the Velaro, you find yourself in a surreal atmosphere, which seems hermetically sealed. Narrow passaged are transforming the train into a sitting-tube. A air conditioning system provides artificial, clean, fresh air and you rush up silently to 300 km/h through the landscape. The relation or feeling for the journey is lost and a look through the window seems like a boring and abstract movie. If you don’t sleep or look at one of your devices, not that much remains to do. To leave this boredom and surreal world, we suggest our last ADD-ON. A fresh air and panorama compartment could help. Big windows, road noise and a circulating fresh air stream conveys the reference to the outside. The train travel becomes an experiance. Ventilation slots in the bottom of the side wals provide air circulation. Large windows counteract the constricting tunnel effect of the seat compartments. Mirrored doors increase the spatial effect of the compartments. Temporary standing seats are used for a short stay. 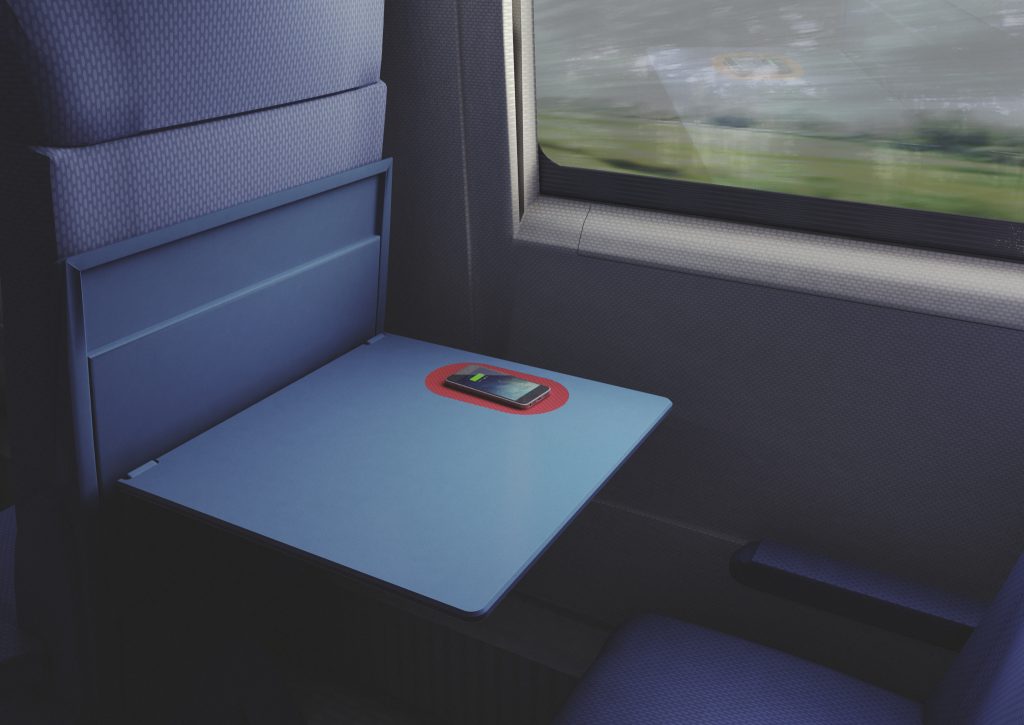 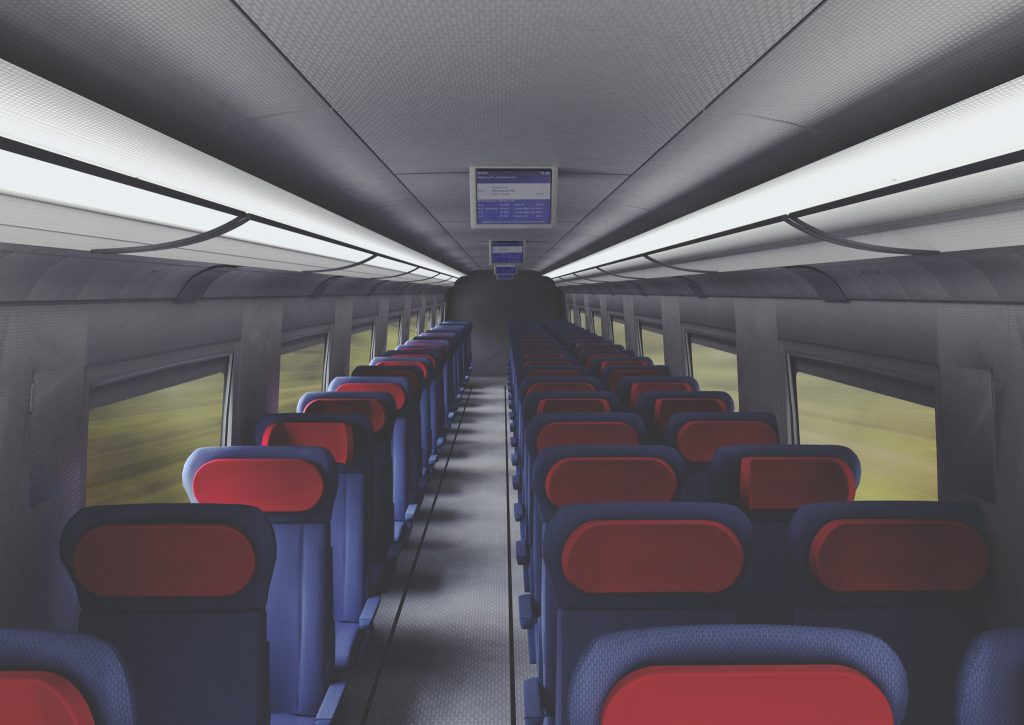 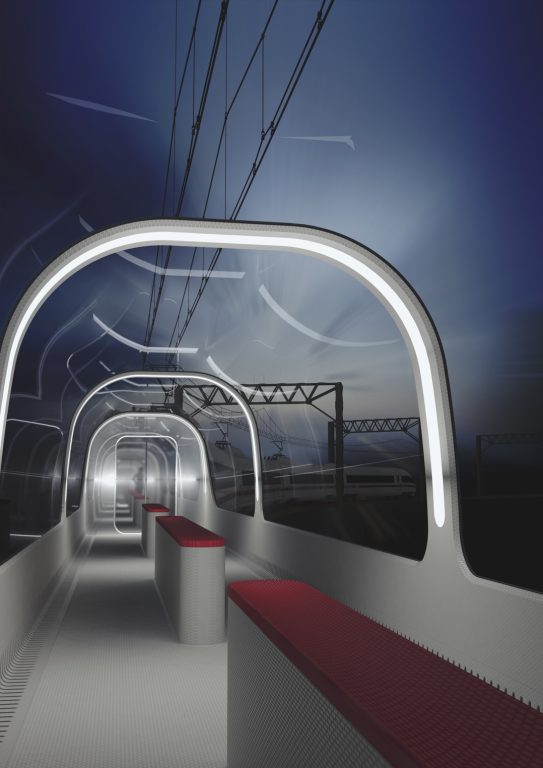 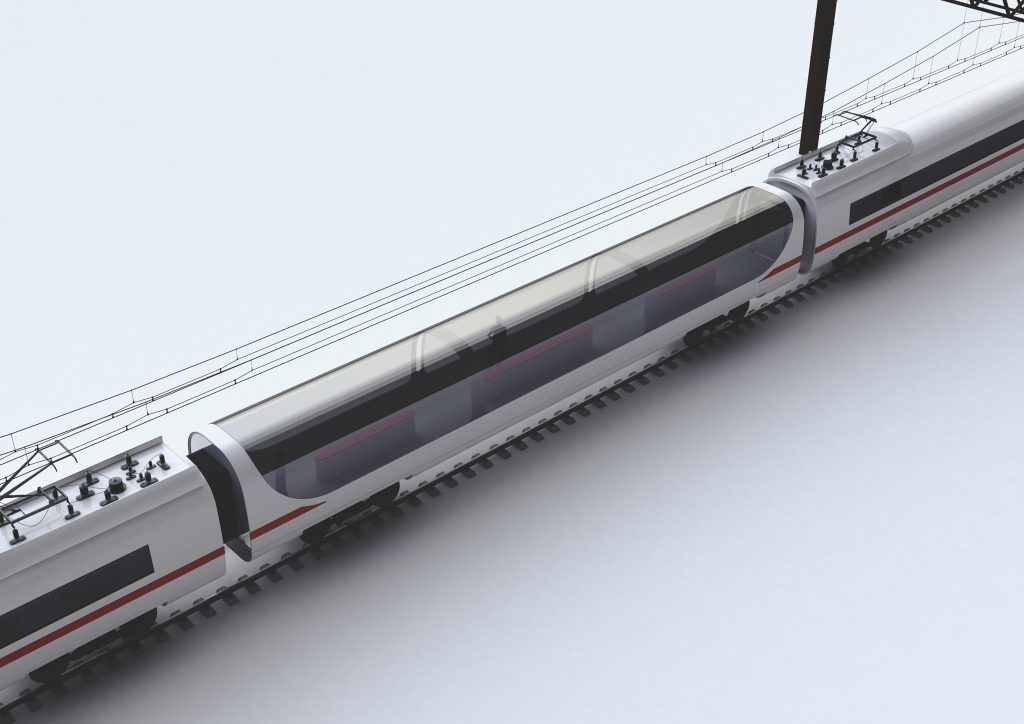 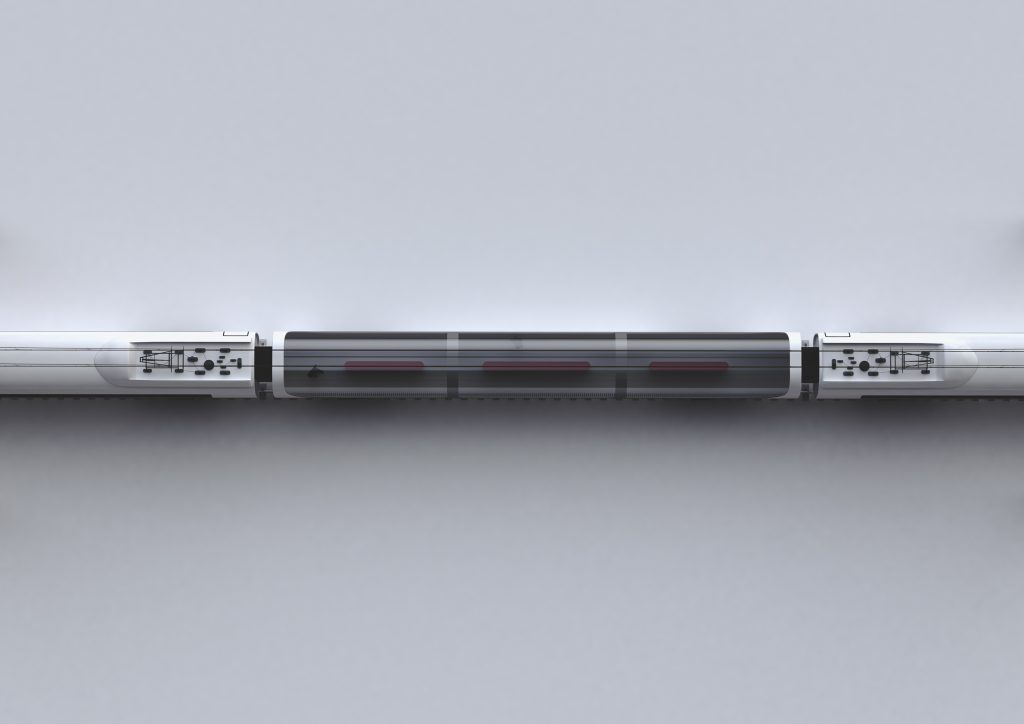 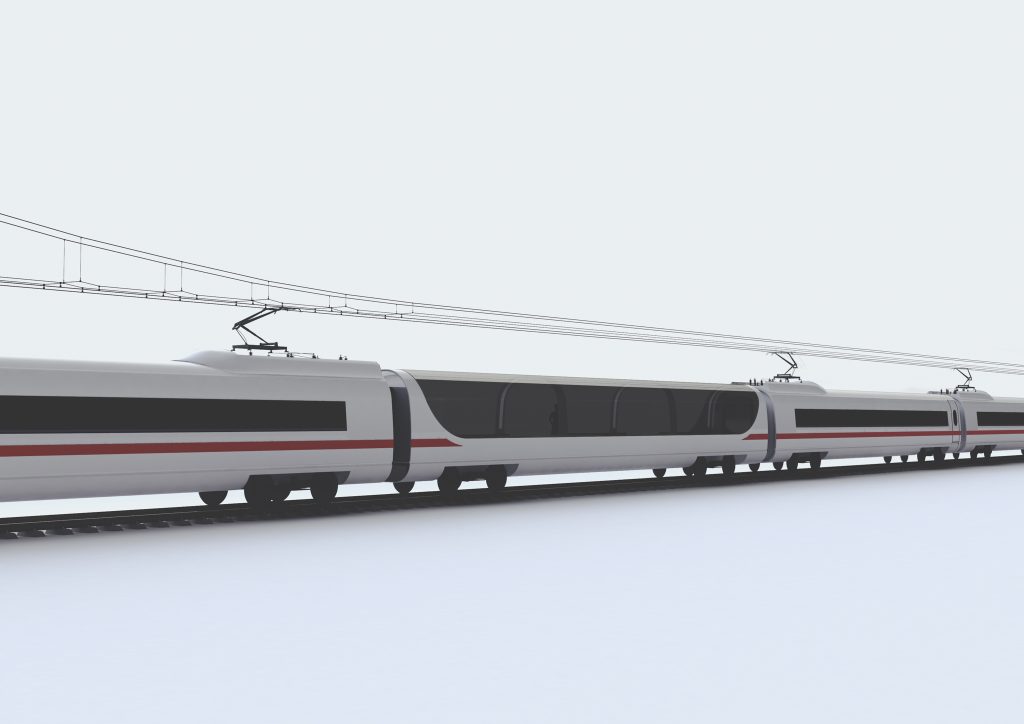 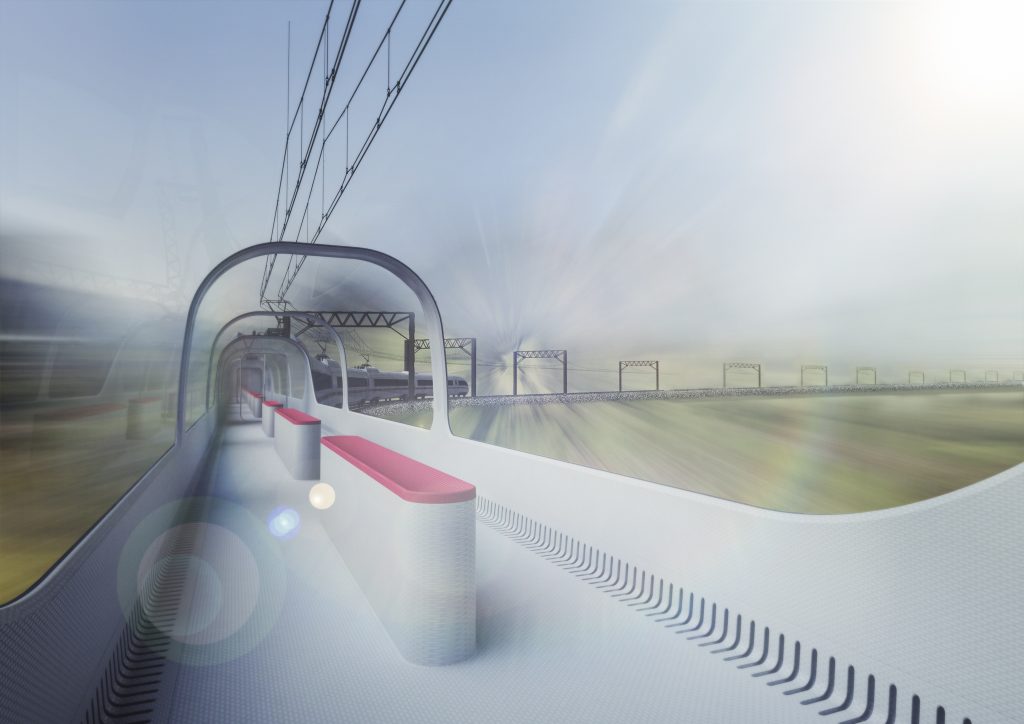 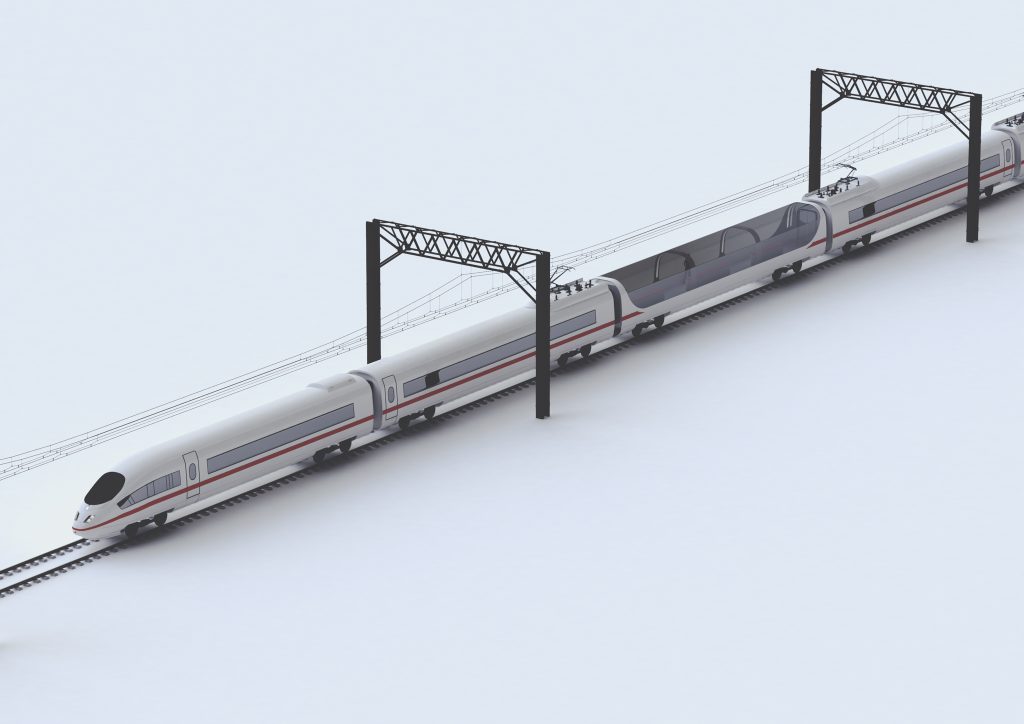 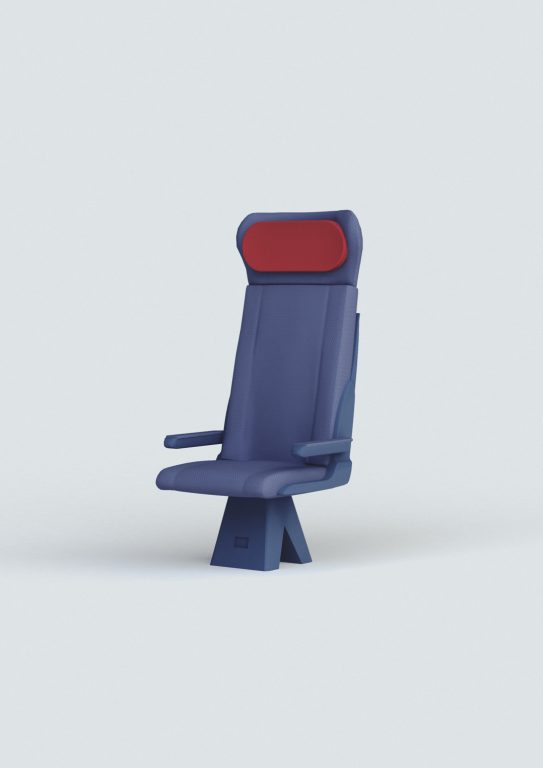 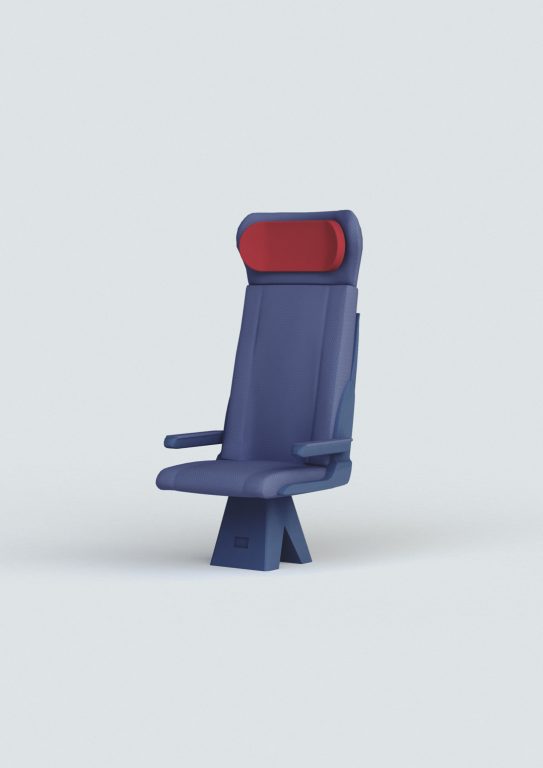 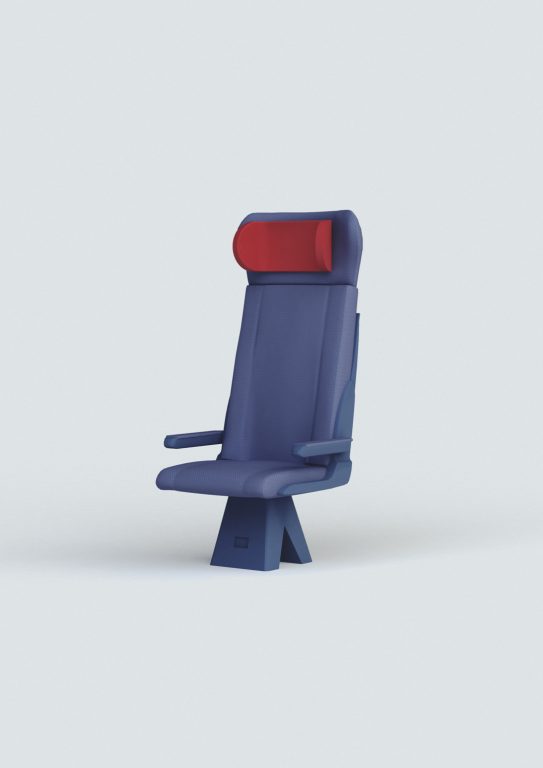 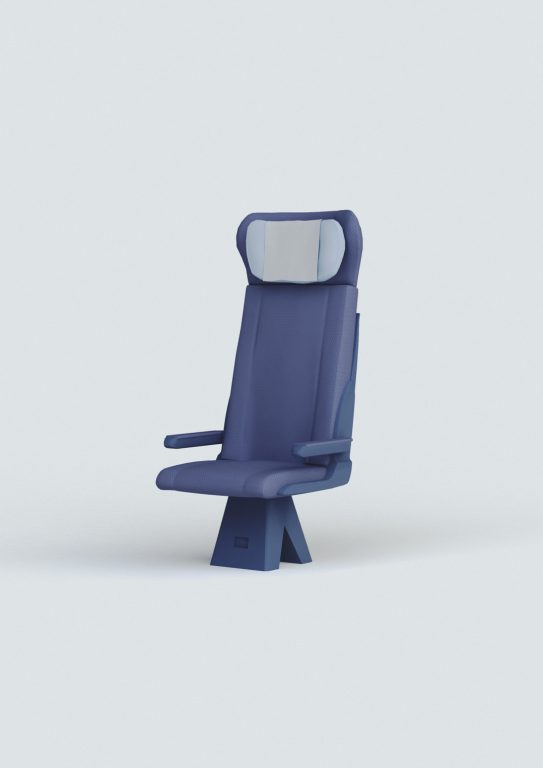 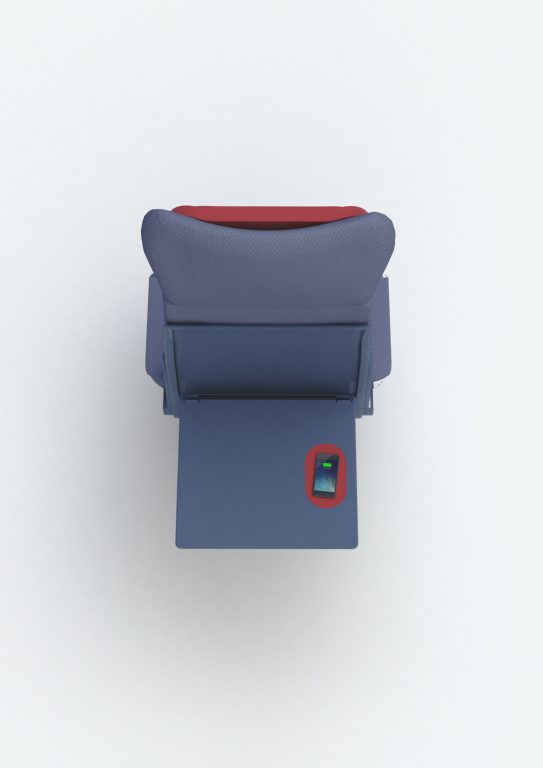 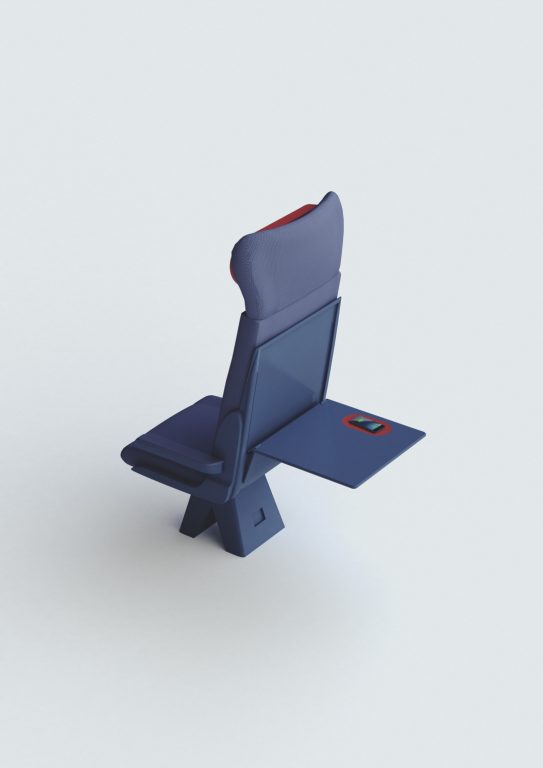 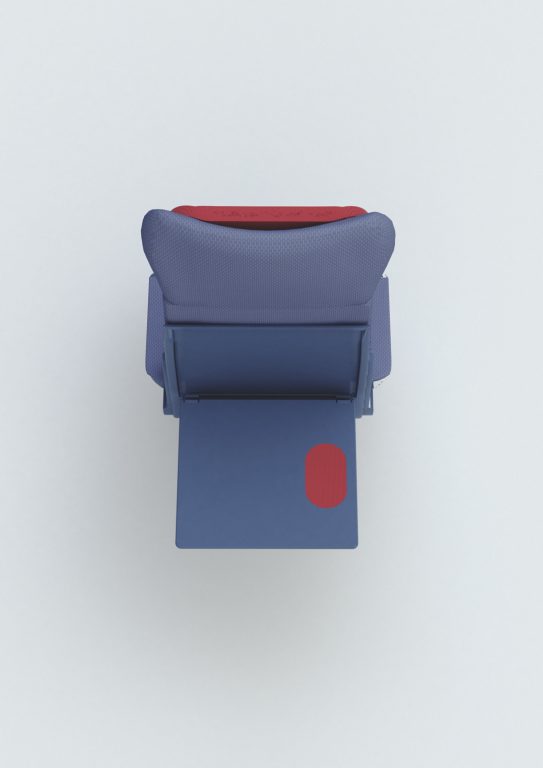