For us, the starting point of our work is the function of the object to be designed. We make it our task to question the previous construction, the material used so far and the current design of each product. Our goal is to find solutions that make an object more efficient, more sustainable, more versatile and more durable.

We believe, the ideal form results from functional optimization. We consistently avoid decoration. The shape of a particular object has to result from its construction and its handling. We are convinced that the function and handling of each product should be as intuitive as possible for the user. We do not attach importance to supposedly noble materials, but search for the material, which offers the most advantages for the respective task in the sum. We don’t want to narrow our view to traditional conventions.

We are passionate about permanent progress and believe that it is the designer’s task to apply what is technically feasible and to think ahead to what is technically desirable. We believe that the designer must be in constant and intensive contact with the society around him. Our work’s aim is to respond to changing needs and provide answers to the challenges of continuous change.

“Their works stand out because they are thoughtful and unusual.”
Peter-Philipp Schmitt about Relvãokellermann at the Frankfurter Allgemeine Zeitung

“No matter whether they design wardrobes, shelves, stools, kitchens, glasses or rooms, they always try to work out the essence of an object in the process of design”
Thomas Wagner about Relvãokellermann at Stylepark Magazine

Founded in Munich in 2014, Relvãokellermann works in the field of industrial design as well as exhibition. The studio developed an independent design language for the kitchen manufacturer Bulthaup, which was presented at the Salone del Mobile in Milan in 2016 and has since been used for new products. On behalf of furniture manufacturer COR, Relvãokellermann designed the separation and storage element “Chart” for the experimental sublabel “COR Lab”. Since 2017 Ana Relvão and Gerhardt Kellermann are Art Directors of the office furniture manufacturer Gumpo, for whom they developed the “Normcore” collection. Other clients include Auerberg, Gaggenau, Griffwerk, Holzrausch, Huawei, L&Z Elements, Schönbuch, Stylepark and Util. 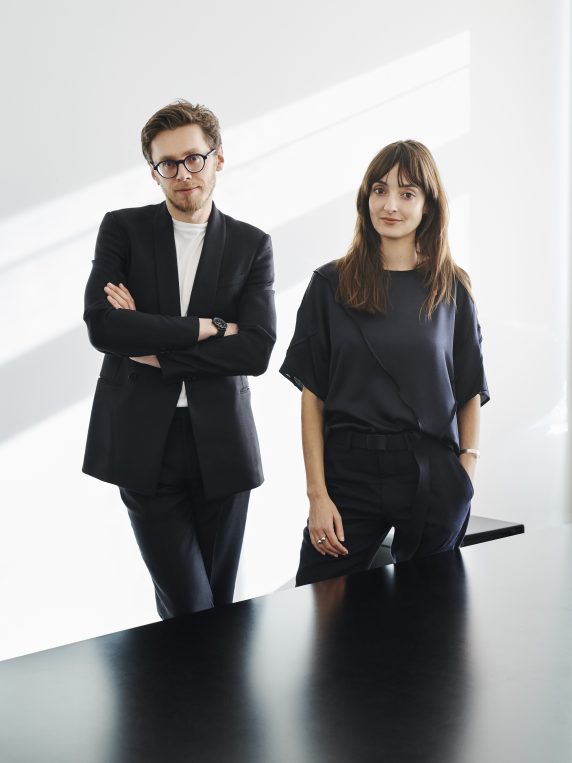 Ana Relvão (born 1986 in Coimbra, Portugal) studied industrial design at Faculty of fine Arts, University of Lisbon. After staying at Miguel Vieira Baptista, Stefan Diez and Designaffairs, she was partner at Industrial Design Associates. In 2014, she founded the studio Relvãokellermann together with Gerhardt Kellermann.
Ana Relvão won the INOV-ART scholarship of the Portuguese Ministry of Culture. In 2016 she was nominated for the Design Award of the City of Munich.
In 2018 Ana Relvão held a guest professorship at the Staatliche Akademie der Bildenden Künste Stuttgart. She has also taught as a guest lecturer at the universities of Leiria, Bolzano and Lisbon. In 2019 she was a juror for the iF Design Award.

Gerhardt Kellermann (born 1983 in Vișeu de Sus, Romania) studied industrial design at the Staatliche Akademie der Bildenden Künste Stuttgart. From 2008 to 2011 he worked as an assistant to Nitzan Cohen and was subsequently a partner at Industrial Design Associates. In 2014 he founded the studio Relvãokellermann together with Ana Relvão.
Gerhardt Kellermann received a scholarship from the Studienstiftung des Deutschen Volkes and was nominated for the Design Award of the City of Munich in 2014 and 2018.
In 2018 he taught as a guest professor at the Staatliche Akademie der Bildenden Künste Stuttgart. Further guest lectureships led him to the art academies in Saarbrücken and Braunschweig.